[a catchup on the drafts folder, whether it is worth it.. yep]


From a note to my sister who wanted some gossip from over here:
Not much news here either. Al’s back for maybe jury duty later this week.
Gels like school, gets lots of boring news about that- she said, she did, he did etc
Fraser has deb ball training, i was sposed to go to a meeting to form a committee or it will be cancelled and arrived as it was closing as I forgot,,,,,,
Got photos school pics this week.
Made a subwoofer and got aspecial amplifier for it, sounds good!

Her reply
I read your subwoofer adventure. You are Terry Ford's son that's for sure. Good on you!

I love you have to hear the who said what Stories. That's so funny. I bet you tune out and get glazed eyes. HA

Lucky bugger that Alexander. I have been called up twice in the past few years but didn't go any further than the letter and the voice mail saying I wasn't need this time. How is he going in his new place?

Awe Debs, what fun times. I went to 8. I stared in none. Our school didn't do debs so they were organised in by ballet schools, Starlight foundation etc. Plus I wouldn't have had anyone to ask being at an all girls college. No great loss really. Waste of money for the girls.

Stories from school, yep, who has been smokin etc
Posted by tony ford at 10:04 PM 2 comments:

Not that any month should be avoided

September for a lot of people is probably a Hard Month to handle for tragic anniversaries.

[posted nearly a year later. Because]
Here, we have a birthday and a mother's death to get through.

The other weegen, there was pizza Friday, and some beer Satdee with 'some' friends for #2Son annual birthday celebration, a bit of fun had by all. So that's the good side of September.

And then there is the the rest of the month.

Morning 20th, a call from Aunty D, "oh Tone,can't stop think...". Unfortunately, I had managed to avoid remembering that morning, so it was a little dig in the ribs for me- "Shit!".

Taking the kids to the grave site of their mum the last couple of years is getting more painful for them, especially my twin gels. We used to go with their grandfather, but I can see that is getting too much for him too. [This is de ja vu too]

Mid afternoon 20th September. One of the boys was home, from the Big Smoke, the other was missing calls on his cellphone "To Get Home Now, we are Going out" , and there was a visit from Aunty and Pop later in the afternoon. #2 missed the visit.

I would like to get through this visit quietly and, well, not quickly, but at least put the effort in to dust down the tombstone and place fresh garden flowers there. We took some Jasmine and Azaleas, the Jasmine Tarn's favourite thing about the house she chose for us to live in and raise our kids.

A nice remembrance from myself or #1Son might have cheered the gels up, but none came forth this time. Sorry gels.

On the other hand, as #1Son said- spooky because:

Twenty nine years ago this month's end, I had to part with Tarn to start an oilpatch career, which lasted to 1999, on the other side of the country. She did join me there though the next year, and we stayed together where ever I had to work, Perth to Adelaide to Scotland to Melbourne to Gippsland.

Twelve years ago this month I started another new career path, paused with a Huge Hiccup, and continued with family support.

Ten years this month ago I had to stop that job and stay at home with the kids, for their sakes and mine.

By the end of this month, I may be starting down a new career path in the oilpatch, and having to leave teenage girls and a young man in their aunt's care while some money is made and separation anxiety is fought. Finger crossed, September could be a neutral month this year. But is it chicken and egg counting, argh.
Posted by tony ford at 9:59 PM No comments:

Not being a specialist- from the data disks that I can access of the grey crap in my noggin- I cannot tell what is going on.
I think that the pea sized bodies in there are the same.
Looking for schleria[?] on the left eye nerve myself showed me nuthin, nuthin, nuthin.
Will have to wait for next visit to see what E.Butler and co. can find.
The left eye situation varies day to day oddly enough- sometimes I can read sentences and the road looks gret as well, or, vision seems greyed over, and words hard to make out.
Different every day.
Latest scan, mmm. I cannot tell whether status quo is as last year or not. Bugger.
Posted by tony ford at 8:21 PM No comments:

Since Last I wrought

Had the six months fun working on a drilling rig...
Fixed things with the cash flow- like:
The car and van.Fixed the west kitchen wall with brother-in-law- nice job too.
Got a nice telly.
Fixing the tooth of #2Son soon.
Been through a few birthdays this last few months.
Spent far too much on Aldi tools, have to find a space for a new bench and shelving to put them on.
Want to make a cloud chamber- a la backyard science- a Muon Search!
Read some great science fact and fiction- life is a chance!
Gravelled the front path again, thinking of doing another around the old cottonwood tree.
Thinking of a outdoor sitting area in the backyard with a nice roof.

Amazing where the money goes- a good year means getting the house paid for I guess!

getting three in one year


Alone almost, well, people do say I have managed it, so as usual, it's either water off the ducks back or breathe it in Princess- Anyway- my four prodigies have made it to an interesting time of our lives, where, if I may be self aggrandizing, we can celebrate three no four, milestones. 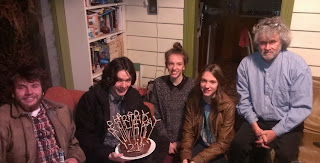 The gels have made it to the TEEN years. With phones and keys and purses...
The second boy will be VOTING on his EIGHTEENTH birthday. And driving that week too.
The eldest is TWENTY ONE- I just gave him the usual birthday present- a watch.
I am a full deck of spider solitaire cards old. And Tarn would be too.

[So then- Five years to go, to sell the mansion, and move to a warm windy lake place... Unless grandchildren start falling from the sky! Need a yard to corral them little ankle biters I suppose!]

So much more could be said- I have not written up much lately, think I am still coming down from the high of working for a good coin and recovering from the stress of it all- not- haha- not quite.

We do seem to have attracted a few new people to the family home- #2Son has friends living in the shed with him a few days a week- Mr C needs to be closer to work- a 15 minute commute interferes with the apprenticeship wage threshold of fuel or food or drink- something like that- and the same with the other blow-in that has landed like a drowned kitten at the door, Mr Z, although I think he makes more coin for socialising purposes only mind you, than Mr C! I should also note that the final year of high school also includes a fair bit of weekend boozing- not like when I was a kid [hmm?]- think I may have lost parental control there- but I can stop his phone use... Just wish he would jump in to do the usual kiddie chore without been repeatedly asked. I am hoping he knuckles down the rest of the school year so as to pass high-school and get into a paramedical course! Life...

What to tell the gels when their friends start to behave like... girls? As above- "live with it", it is only one phase you have put up with- at a time- should be okay within a week or so- like the common cold- and Who Knows...

About #1Son and the milestone- he made it down from the Big Smoke for a NIGHT to celebrate with us and cousins and grandad and the carers that are lifelong friends. Was a good night out- everybody well behaved. The cousins, my brothers twin girls, who also be 21 next year, brought along a hard-drive chockers with their overseas trip to Europe- we saw about ten percent... another time BunnieTwins! 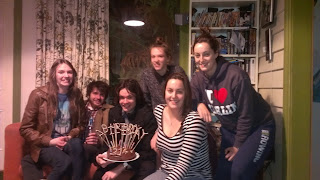 Since the start of the course of medicine-"copoxane", very occasionally there are  little tingly feelings in back and sometimes in the legs.
No episode or attack on the temple.
MRI next week, to see how well(?) the leedle pea bodies in the grey matter are growing.
Thought the effect of colourlessness in the left eye would be bad for the job- at least a little bit, but no, not affecting the job as long as someone else can verify we are calling a red "red" etc etc.
Wonder about reading street trraffic signs from afar though- better not have an attack on the right eye- else will be no good for reading/driving/describing rock colours or seeing what needs to be recognised.
Not depressed- just amazed at evolution, and coping strategies the DNA deals out.