Yesterday- rearranged the vines [nearly all] backyard Vineyard vines to line up down the side yard, and sulphur/insecticide sprayed them all for Xmas.

I was away the other month, they were not watered regularly so the harvest for the homemade wine won't be much as there is hardly many bunches formed, for all the pots, and will only get  a few kilos this time.

Some are abundantly laden however, so that is nice.

The planted vines seem to be doing well too, plenty of rain fell while I was away.

Looks like I will be away again so will have to bribe the kids to look after the pots better, argh.
Anyway, that's the latest on the Portable Vineyard December 2013
Posted by tony ford at 6:20 PM No comments:

Yesterday- rearranged the vines [nearly all] backyard Vineyard vines to line up down the side yard, and sulphur/insecticide sprayed them all for Xmas.

I was away the other month, they were not watered regularly so the harvest for the homemade wine won't be much as there is hardly many bunches formed, for all the pots, and will only get  a few kilos this time.

Some are abundantly laden however, so that is nice.

The planted vines seem to be doing well too, plenty of rain fell while I was away.

Looks like I will be away again so will have to bribe the kids to look after the pots better, argh.
Anyway, that's the latest on the Portable Vineyard December 2013


Now that I have combined all blogs into one, means titles are going to be even more cryptic... And hopefully descriptive as to whether it will be worth reading through. As the SEO spammers keep on at me about! So there will more stuff on the family, and then hobbies like windsurfing, my state of health coping with MS, and the weird and wonderful rants and being Marvined of course. Maybe being Marvined means nothing to you now, but then when birds of a feather congregate, sparks may fly. [That's where the weirdness comes in, by the way.]

Since I have been back from the the drilling rig in desert - my MS symptoms seem to be at low ebb, which is good, apart from the loneliness feelings or paranoia of not being kept in or deliberately kept out of old friends or family loops of information flow. I know I like doing things myself, but really- am I that crappy to be with? And/but looks like I am going to need more help as when and or if the MS attacks become more often or severe or both. So where will that support come from? Flying backwards and forwards to work is okay IF there is going to be regularity and time off to wind down. With people- do I have to chase all the time, or be told no time, maybe sometime else. Retchereding. Look that up!

But then the winding down has to be put off as getting home means re-adjusting to the reality of rearing two young women and a young male adult. Which seems is not as easy as it was with the eldest child just a few short years ago! Having the friends of the YA around too much is wearing too, means the house is FULL- and EMPTY stubbies/tinnies (beer containers)  appear SUDDENLY on my - well it is not that neat but anyway- COFFEE table. AND things go missing while I am away- like the brand new remote control for the brand new EXPENSIVE blue-ray disk player/PVR! AND the relatively expensive yankee can opener is missing too!  AND the poor old portable grape vines were not that well looked after- the bunches are going to be the runts of the year- on all fifty pots! The ppo wee hoose was not looked after properly either- #2Son needs to be reminded that friends are not just there to tidy up after him! Even though they are staying over for freebies- Should I stop it?

BLAH BLAH- whinging and whining, and not appreciated. Just getting started- NO just relieving myself- I mean releasing some pent up up crappiness.

THAT'S being Marvined- having a brain the size of a planet, and being used as the bank and cleaner.
But still I am doing it.

but still marvined as well, the last three weeks I have put nearly three tanks of fuel towards WINDSURFING and a thousand kicks on the vehicle's speedo, while actually being on the water for about sixty minutes all up. Yep, twelve hours travel for one hour on water time. To be fair, the wind was shitty or not there, or I was too tired(?) to stay out too long. My MS advisors have mentioned that- BE ACTIVE, be AWARE of tiredness too. Hmph. Bloody off putting the whole thing, I want to go SPEEDSAILING and am not up to it anymore. Throwing money at the shop for better gear means it will be worth more down the track cos it probably wont be used.... Ache and belly...

But I still do it.

AND today was a good day today- 30 minutes flat out after the wind came in at 1:10pm (2 hour wait... had nearly gone home at 12:10pm).  Very nice on the new board with the new sail and the new boom and new mast insert and new wetsuit and new floaty jacket, less time IN the water this time- bliss to be up to date almost- so now I need a new mast and another sail (a  5.5m). Then the wind relented so I packed up and and   and had a nap, as the tide was RIGHT IN! Again I had badly miscalculated, thinking that last weeks' high tide time would have occurred earlier today- idiot- NO. Ah well, very peaceful, puffing on a ciggie and drinking a packet of UHT coffee flavoured milk. Watching the pelicans and gulls floating in the shallows. Strange day, only me and two cars turned up, one a boater and the other a dad and son looking around- NO ONE else sailing. Bugger me.

Wish I were more positive- maybe I am normal- or just normalising things out. Wish the kids were just a little more house proud- not that I am a great example. Did do some retail therapy this week too though. New mower- self-propelled expensive little beauty, a new whiz bang Weber, a pole chainsaw for the bloody trees. Had the family wagon's electrics fixed up a bit for a grand... still needs more work!  And then I have my sister's wedding to look forward too, and all that jazz, going there in #2Sons new old car- nice it is too. And I have another desert job next week- means I miss xmas and the Boxing Day Cricket match at the Gee with the two boys, ouch, Ozzies V The Poms. Bugger.

PS the pics today were with a lens kit for the android phone- works well and as a macro for work, should be excellent too.


/*Retchereding- being pissed off at people and doing nothing about it as the effort may mean loss.
Posted by tony ford at 6:15 AM No comments:

Woopie trails in the desert and old music compilation cassettes

Woopie trails in the desert and old music compilation cassettes 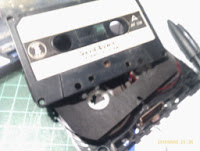 Before the last job started [in Geology!] I found- and then so put in to my van some of my old old old music compilation cassettes. The woopie for the journey to work had no mp2 connection either, and I brought no CDs with me anyway...

So- back to September:

Thus, I was in a travelling time travel machine [most of them others are sedentary- Al La The Police Box of Dr Who- althogh I think it can also fly- where as I could not unless travelling over the speed limit on an interstae hwy counts?], as each was played once through in the van. At least eight tapes I think- it was a eight hour trek to the Other Littler Big Smoke- Adelaide. That was a few weeks ago now. "A Wednesday in September". The tapes were all from the eighties, late night recordings of favorite album songs back then, after a night out with Tarn or the boys and sleep was too far away. Tracks from Men At Work, Split Enz, Beach Boys, Talking Heads, Supertramp, ... In other words, a few. Trouble was, being tapes, no fast forward or skip to next song- [a problem of the general population it seems that we only need to sample our favourite music too now- ie 10 sec, skip, 10 secs, skip til you get what you want unbtil another song name appears on the screen. Anyway- see this guy or this guy- they are good- skip through as short]..

The woopie we are using used to get to the desert, throught the desert, and back from the desert has had radio and a CD player with no MP3 connection. And no auto fridge [for the beer cold drinks.] The trip up and around the desert was not that boring, my friend Doug has a history in the oilpatch going back a long way, so many tales are etched in the back of my mind. Sometimes near Moomba- the mobile phone network would work, weird or what! [Doug might be a generation older than me, but he loves his iPhone5!] and also a radio station, relayed either from Broken Hill, Perth or maybe somewhere in Queensland- but never relavent to ME- I do seem to like My Big Smoke Radio Stations back in good old Vic. 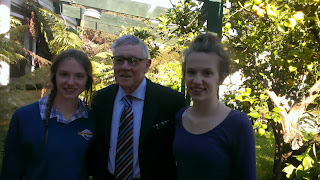 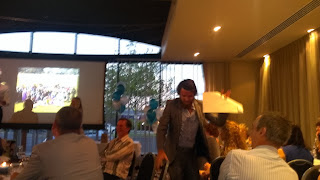 September. That's a long while ago, and the kids have [had?] missed me. Really? #2Son has nearly finished last year of high school and last exams, telling me "I am studying", other people worrying that it does not look like it. Even If I Was Home, I am more than sure he would be telling me that same thing anyway, whether he had or not. Being a teenager once, I remember that.

And I am was up here there, for now, or longer? Was not longer. There was much to-ing and fro-ing on progress the last few days, will this be done or that. One choice was an sxtra ten days- not taken finally. Whew.

I have/had been at the desert job for so long now, I am getting used to the sub-luxurious living conditions and a the far off life of being the incredible gullible dependable single dad is fading away... Ah Innamincka, lovely place... Wow, more than that now, the Melbourne Cup is on as I write, well, back then! Weird life. Not  a housework thang to do. Nice. In a small way.

ciggies, medictns- i took enuf of those that they lasted right to the end- not as planned but as anticipated anyway- dusty cigs are crap, bur ah well, and the MS meds- could have stretched it out.
Posted by tony ford at 4:11 PM No comments: