Regrowth in the Shiraz

After the new attendance to details- like removing bad leaves. the vines are all recovering well, sans fruit on the shiraz. The spraying of the commercial copper compound and a mix of some olive oil and bicarb-soda alternative weeks maybe doing the trick.

This weeks progress in the Portable Vineyard.

Below- regrowth on the deleafed Shiraz vines- pity the vines do not regrow the lost grape clusters. 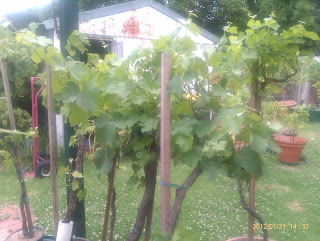 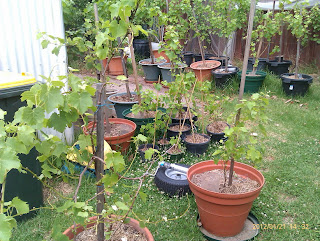 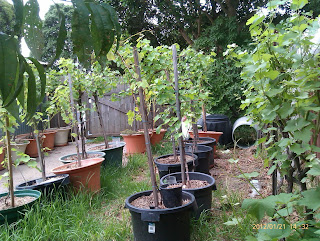 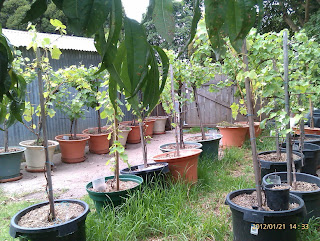 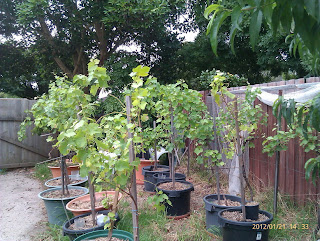 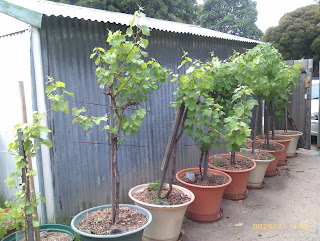 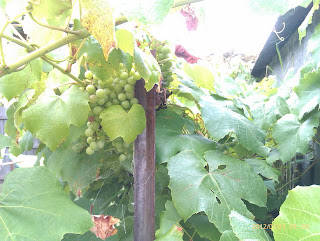 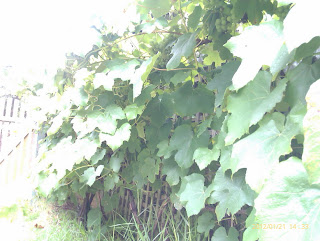 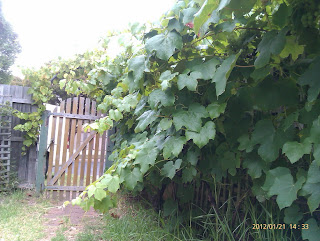 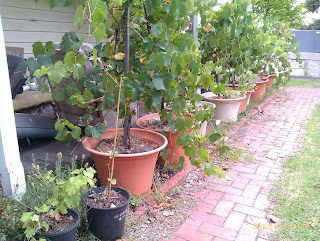 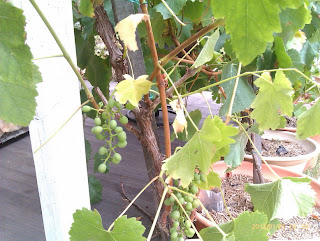 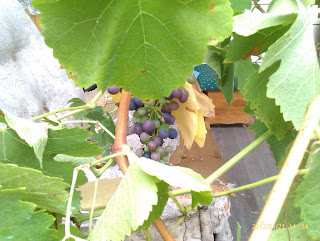 By Christmas time 2011, I had to do something about the mould afflicting the vines, so the pots were spread around the car-parking spot in the backyard. For the next week or two, I spent time taking off the yellowed leaves or obviously infected leaves and binning them. This was the poorest sorriest looking vines in the world before the new year. 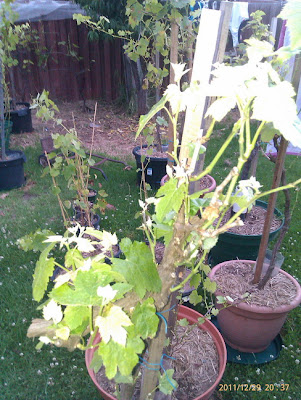 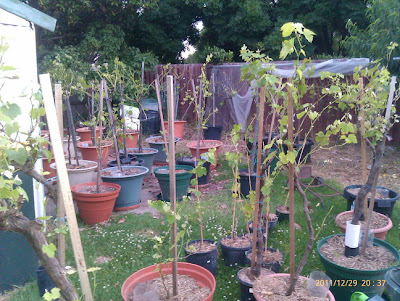 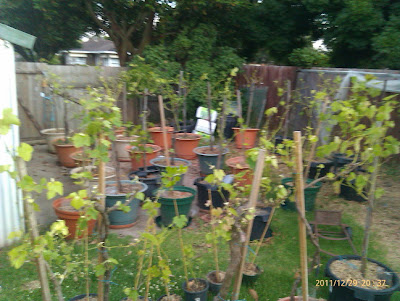 Short as life is- Score for life this week
Zilch. Yeah, Nah, whatever...

Last fortnight I won a mark on the scratching post- fixed the laundry machine. Yay me. Won some money on a lotto ticket. How much you ask? Enough. For another ticket. Other good news? My nieces and nephews all had a good year. Looks like the latest ones to have finished high school are all off to university. That makes six! Out of Six at uni this year. And not counting the eldest that has finished her course and is starting in the circus of life this week at a Big Smoke Hospital!

But. My narcissistic and hubrisisckity life has become a little flat.
Haha- nobody loves me, I want to feed the worms... I am feeling mortality creeping up, as the kids are growing up so fast, with one one out of the house sort of, and the next one on the threshold of leaving high-school to be a chef, and the gels just starting high-school next month. And the MS effects are back, I see colours when I look down at night, and the left lower leg feels spongey when I get up... Dunno man.

But, see, well.. I have started the week off wrong though.

Last week I thought I had got a tire-shop to fix a punctured tire of my friends ride on mower- "wire in the tire"? Turns out--- twice! I went to check on it at the NuHoose a week later, and the bastard was flat. Again! Went back to the repair shop and said- OI U! Lookat at thart- eets FLART mate! They fixed it again, but we will see next time I'm oot thar...

This week I see on the social network that a cousin had gone past our town to a surf spot up the coast for The New Year. And got home safely too- or there would be no mention or pics.
Forgot I lived nearby? I would have dropped everything for a cuppa coffee with them, offered a bed etc.
Now I won't--- feel too bad, but it's the little things that get ya... Easter with the  extended family seems too much effort for me now. Eldest cousin in the clan, and well - snubbed?

A birthday gift- I have a hot air balloon flight to look forward to. Soonish.
But there was a bad hot air balloon accident in the NZ the other week, so I am a little bit hesitant about taking up the birthday present now...

My internet use was used up by the eldest child the other week by 25% of the monthly use in a few days!
I thought he was back from the Big Smoke to party!
He thought we had UNLIMITED data access... nah mate, after 2am, you can go for broke nearly.
So for the last week, Slow Days At Holiday Time For The Kids...
But surprisingly, they seem to work with that. I am not. Once over the plan limit, back to 25Kbs...
The worst thing, I could upgrade for 20 bucks and then downgrade back to the old rate, FOR THIRTY more bucks!
No data blocks to get! Sucks man, really sucks.
No blogging, just the mail mame.
He got a letter  today for jury duty next month.
Karma?

What else. While I am in the crappiest mood for weeks...

My niece's anniversary passed by, another one. Unbelievable.
Not many get what she got (Metachromatic Leukodystrophy (MLD)), an envitable sad time each year for us. Savvy would have been 13 this year.

The vines have been attacked by mildew or mould, and so the whole gallon of shiraz I wanted to make, won't be. Spraying the Portable Vineyard every other week with store chemicals and a homebrew mixture the other. Might get a liter of Pinot. wow...

Worst day of teh week,

The work vee-hee-cal has developed a whining screaming annoying sound lately, at low revs, and the aircon is shite.
I bought a new fanbelt for it.
Before looking to see of I could do it myself, and, well, I can't replace it mahself!
Went to a auto repair shop this morning- he said it's "dry". Interesting. But if it was gunna get worse, better pull the pulleys out. Right.

The second boy went to the surf today- tonight he looks like a lobster. Again. "Sunscreen wore off " my fat ass! Lazy butt head, hope he learns this time.

As the kids were all off with friends today, I thought I would drag out the old 12m yacht- I mean the radio controlled 3 foot thing, cos it looked to be nice after work to be on the lake with it.
The first hour was just fine.
Then the wind swung around and VOILA, the poor beastie was heaving and splashing in the huge 2 inch ripples like a rat in a bath with a cat.
And then the electrics inside it got wet, so it sailed sailed off BY ITSELF to the middle of the lake.
Well I was a bit p'd off!
In a huff I left it to fend for itself in the sticks and weeds in the deep end, if it did not sink first.
I sped off in the van to grab a kayak from home. Ten minutes later, the poor beastie was being hammered by the ripples and it had lost some gear overboard- the boom came out. I paddled out and brought it back.
I took off for home to the screaming kids, fighting cats and the ghosts, and stalled the bastard van at the roundabout...
Thongs and a manual with the seat in the wrong position don't work...

As I started off, there was a NEW sound! A horrible rumbling sound as if one of the pulleys mentioned before, really had stuffed up...

Wham, wham,wham... What the?
The washing machine agitator was Not Agitating very well.
Oh oh.

Hmm. Google the machines problem, and Bingo! Another quick fix, thanks very much!
Although, the Marvin pitch here is that it is Xmas time in Oz Land... The appliance repairers like to have some vacation too, bugger 'em!

Online is cheap, but mail order? The post script will tell you what is going on later.

So far, the 4 little dogs required are only $10 a pack, here in Oz or yankee doodle land, without postage, but as the repair shop should be open Monday...

update Monday
The local appliance repairer [and wife] wanted a bit more than 10 bucks, $42 in fact. Hmm. His wife did say that even a packet of dogs was a bit more than $10, but I got a complete renewal pack- o'ring, dogs, cams, bearing and washer. So I cannot complain that was all it cost. Fifteen minutes later- all done.

In fact, it may have been an expensive large machine to start with, but it has cost less than $150 to maintain since 1998! Without the repairers add on too- at @ about $51/hr for at least only 30 minute jobs too I must add- which I try to avoid at all costs- why have a shed of tools getting rusty and dusty, really!
Posted by tony ford at 10:46 PM No comments:

Today I watered the vines. A lot. With what I thought would be enough to make up for the last few days really really hot weather, as IMBY it was reaching about 40°C with varying humidity! I counted up to about twenty seconds per vine, filling the 2 liter cut up bottle, the saucer, and then the rest of the allotted time hosing into the top of the pot to give the mulch some moisture. And the incessant weeds... At about the fifth pot, I thought I better check for how moist was the soil anyway- it was to about a fingers depth deep after three days since the last watering.

From the meter, I read ~00841148 beforehand, and 00841383- about 240 litres for the lot? And the strawberries, coriander and chives and greenhut vines. There are 38 shiraz vines now, refoliating furiously! And the newbies too. Only 9 Pinots with 3 littlies. And the orphan Chardonnay- at least until veraison it is! So it looks like about 2 to 3 liters per vine every 3 to 4 days should keep them moist most of the time, with an extra allowed on the hottest days.

Berry development report- Pinot Noir are still on the small size, at least compared to the Foxey Garage grapes which are almost a centimeter diameter now and only watered off the old shed roof!

Rainfall to Date since 1999 IMBY