I don't know. I do know when I was my gels age, I had consumed my Dad's Time Life Library before I left elementary/primary school. The next volume in the series was eagerly awaited. When I got into secondary and tertiary schools, I thought I was well rounded thanks to my Dad and Mum and the shelves full of reference books. . There was no politics / religious fervours in the hoose- what I knew or believed, I found out by myself.

I don't know. We have my Dad's books here on a shelf, with all my college books too. I have not pushed science or logic on the kids- but maybe I have- Gel#1 has worn a tee-shirt with a dinosaur face and back plates to a christian fellowship youth meeting- but maybe it was nothing to do with the other- just another shirt to slip on?

I do know the other night after a dinner out with friends, that the gels need some extra-curricular education, and a same with #2 child- he really needs to just page through all the stuff on these loaded, bending, groaning shelves before the trash man is asked to carry away the hoarded knowledge of the ages.

We know now. Or do we? We came back late, one of the hottest nights here for awhile. One of the group at the dinner displayed a small grasp of the antivaccers or antiGMOers "knowledge" disturbed me a little. I like the odd conspiracy theories myself, as a story, but being as cynical as I am, like I said, the lack of any depth of knowing things other than the 'one liner'/'ten second air grab' was a little off putting. Maybe the drinks we were on and the heat allowed a relaxation of sorts.

I feel or hope that maybe an element of doubt into that "knowledge" may have crept in to some ones views, and that is a good thing. I think, cos I don't like taking sides without hearing out the story at least.

Now the kids know. We got home, 'twas dark, no moon or clouds. Another beer in the garden and coolness that was slightly better than inside the old hoose. I pointed out to the gels- there is another little galaxy next to the Milky Way- they could see at midnight the Magellanic Cloud. They did not know about it! #1Son said he surprised his classmates a few years ago with that little gem.  No sign of the Lesser I think, the street lights did not help out in the backyard. I did not really look for it either.

They tracked down A Belt and A Cross, a planet and watched the Moon rise. Jupiter was bright that night. My Google Sky worked out fine too, but I think the MicroSoft sky atlas would have been 'funner', more info I mean.

Eldest Son spotted a few streaking meteors, the gels kept missing them as they were not looking that way. For a little while at least, streaking light from the NNE and then I saw one streaking to the NE.

Even a few satellites lit up by the waning Moon orbited through our sights. Then the twins caught some shooting stars, and they wanted to know if Son#1 had at least made a wish!!

Then, there was-"what about taking a picture"?

The not so cheap but not a DSLR was set up by midnight on the Xmas pressie tripod.

Myself and Son#1 tried a few ways, but a few beers and having specs on tired me out, and so #1 showed the gels what could be done with all the setups on the camera.

After an hour or so (less?!), there were images. Orion's belt, and the Southern cross have been captured once again by humans to look at and think about. I was so proud of the three of them and was sorry #2 Son was partying at a friends. 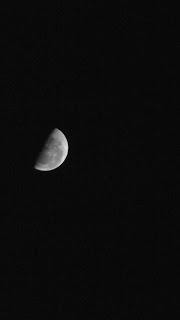 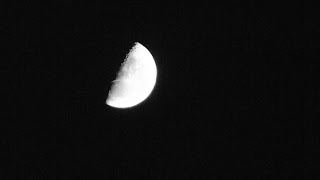 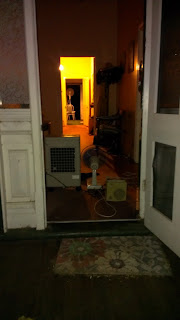 Swapped the far one back to front door so there are FOUR fans blowing cool air down passage to four bedrooms.

Follow up here now 3 Jan, rest of night could be highly informative... 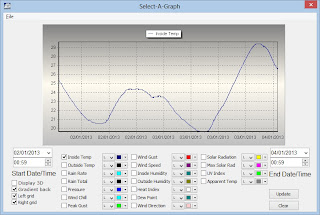 With the added fans forcing air down the hall from outside and out through the bedrooms and through cracked open widows, and possibly up the still unblocked chimneys, the house cooled at a faster rate than the prveious night. Th eovernight temperature declined to about 20°C, so could have left the fans on til morning.

The only bummer was I did not, the poor neighbor over the road had his car stolen. Weird it may be, I actually dreamed someone had gone and bashed in my vehicle windows so  I had to borrow my mum's old car!
Posted by tony ford at 6:00 AM No comments:

And that was crissy 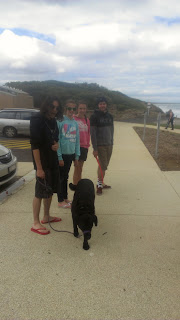 This time with my Mum and Dad- at the beach- windy and chilly- not summery at all. The folks appear to be coping on the outside, but not 100% well: Mum in the electric wheel chair and Dad and his 'oh-ow' shoulder... but he was planning an around the bay voyage with my brother  Mum says he lights up when Irene is involved 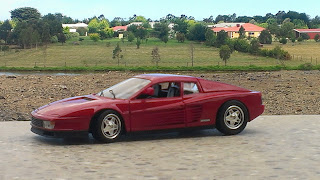 Dee's Pete gave her a new car to go with the hoose...

Quiet enough Chrissy Day with my wife's family sans her dad- ill. Turned out a late long night, nice company. The gels loved their pool. Of course. [Poppy is still not well either.]

There was my family's big do other side of the Big Smoke- sort of missed that atmosphere- twenty odd family- or more- wait- 5 sibs, plus pardners, plus ankle biters and YA- yeah- more than that. Anyway- we missed filling up over there- but definitely not missing out back here with Dee.

Thursday night out too, with Steve and Fran, the gels disappeared down the other end of the house. 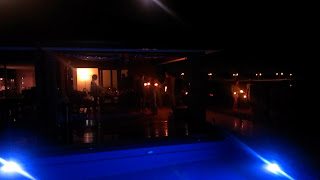 Funny old night out at the nu hoose wif a pool- gels again disappeared down other end of hoose, but so not really invisible- "do not enter hoose wif wet feet" again and again! Anyway- another nice nite with taco mix and soft tortia and their friends. And nice Rockfords Black Shiraz '04 that no one else wanted to try- to early? It was sweetish too, very nice, lasted the whole evening- no guzzling on my part! There was some loud bangs at - oh- about midnight? And a swim for me too. next day not bad at all- read a book.

Rest of the Year?

Hopefully more work through Skye or as a consultant geo on a rig, as the government is pulling out of family support for single dads, the utility company bills and local shire taxes going up are gunna drown me... I think the four kids are going to survive with or without me, they can sort of cook and clean and get to school themselves...

Yeah, better be  better year all round, looking for that sunshine is getting harder.